A Century of Corruption is Enough 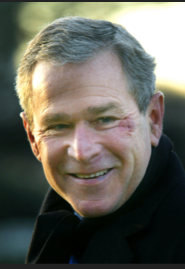 Remember as a kid when you were doing something brave, like jumping off of a rock into the water, and to show your bravery, you'd scream Geronimoooooo?  Or was that just us kids that grew up on the Rez?

This is an older story with some new tread about Geronimo.

The Geronimo rumor first came to wide public attention in 1986. At the time, Ned Anderson, then chair of the San Carlos Apache Tribe in Arizona, was campaigning to have Geronimo’s remains moved from Fort Sill, Oklahoma — where he died a prisoner of war in 1909 — to Apache land in Arizona. Anderson received an anonymous letter from someone who claimed to be a member of Skull and Bones, alleging that the society had Geronimo’s skull. The writer included a photograph of a skull in a display case and a copy of what is apparently a centennial history of Skull and Bones, written by the literary critic F. O. Matthiessen ’23, a Skull and Bones member. In Matthiessen’s account, which quotes a Skull and Bones log book from 1919, the skull had been unearthed by six Bonesmen — identified by their Bones nicknames, including “Hellbender,” who apparently was Haffner. Matthiessen mentions the real names of three of the robbers, all of whom were at Fort Sill in early 1918: Ellery James ’17, Henry Neil Mallon ’17, and Prescott Bush ’17, the father and grandfather of the U.S. presidents. 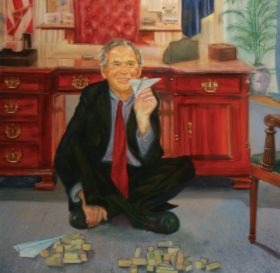 In order to make you look like a madman or "conspiracy theorist", they will just claim that you are using the Epstein painting as your "evidence".  Well, instead of being a "conspiracy theorist" be a conspiracy prover, and point out the mathematical impossibility that the same flight number was hijacked 31 years earlier, Nixon placed sky marshals on US aircraft on 9.11.70, and the same guy that invented the hydraulic system on the Boeing 727 worked on the autopilot system for the 757 and 767 and ask them what the odds of that are.
Additionally, just like George Bush, Nixon curtailed the rights of individuals to travel freely after the DB Cooper false flag.  In July of 1971, Nixon already set up trial airports in the US for passenger screening, at great expense.  The newly patented metal detector was used to screen passengers for weapons, and ID checks were implemented.
Not to mention, G. Gordon Liddy worked for his dad that was a patent attorney.  In addition, after Najeeb Halaby left Pan Am, he went on to set up airport security upgrades, selling equipment all over the globe, in addition to brokering the sale of 25 jets to King Hussein.  His daughter eventually married King Hussein in 1978.  What are the odds?
Needless to say, after 9.11.01, companies made billions, retreading this same ruse, i.e., selling airport security upgrades all over the globe and stricter screenings of passengers.  This was a boondoggle for the company Rapiscan, or OSI systems, depending on which hat they wear.  Is it just a coincidence that this company is a privately held company and sells airport screening tools all over the globe?  I think not, the owners are most likely hidden (for the most part) and this company is nothing more than a money printing machine for those on the inside that knew that 9.11 was going to take place.  Of course, they wouldn't want to have a publicly-traded company, as these scumbags would have to share the profits with the public.
I wonder if George W. Bush is a silent partner in Rapiscan.
Regardless, let's dispel the notion that a bunch of Saudi hijackers perpetrated 9.11 and call it what it is, a false flag used to implement draconian measures upon the population.
Twenty years later, we have a new false flag to deal with...it's called Covid - 19.  But that makes me a "conspiracy theorist".
Am I the only one that sees a pattern of behavior here?
at December 12, 2021