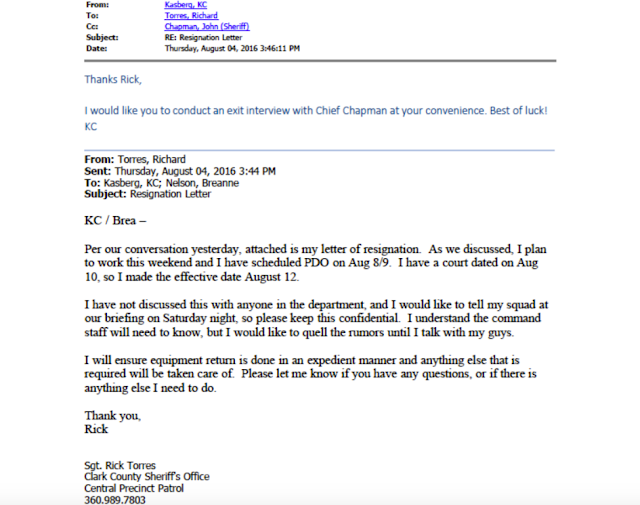 Years have passed since the defendant was arrested, and made a plea deal to avoid being framed for a murder-for-hire plot orchestrated by his new court appointed attorney after the withdrawal of David McDonald.

David McDonald slow walked the misdemeanor case for 17 months knowing that Sergeant Torres murdered Jason Wilkinson.  When the defendant attempted to go pro se, the Judge Zimmerman ordered the psychological evaluation based on the defendants fear that the Federal Government was trying to kill him, when in actuality, it was Sergeant Torres.

The defendant was run off of a cliff after being chased down a dirt road in rural Skamania County June 4, 2015.  The following day he and his divorce attorney were going to depose the "victim" in this case.  Obviously, the defendant did not make it to the deposition, as he was laying in the bottom of a ravine and nearly died.

Torres was not at work at the time the defendant was ran off of the cliff and none of defendants have every interviewed Torres about his whereabouts during this time nor the events surrounding the murder of Jason Wilkinson.

It is not plausible that the Prosecuting Attorney just forgot about sending the information that they hired a murderer, Rick Torres.  They investigated Torres 2005 shooting, covered it up, then hired him 7 years later knowing this was in his background and didn't disclose it.

Posted by Matt L'Hommedieu at 7:10 AM No comments:

Past Behavior is Best Predictor of Future Behavior

Fortunately, today we have google and yelp to review people and their businesses. For an attorney, their reputation is their stock-in-trade. The conversation below depicts the outward behavior of attorneys operating with impunity. 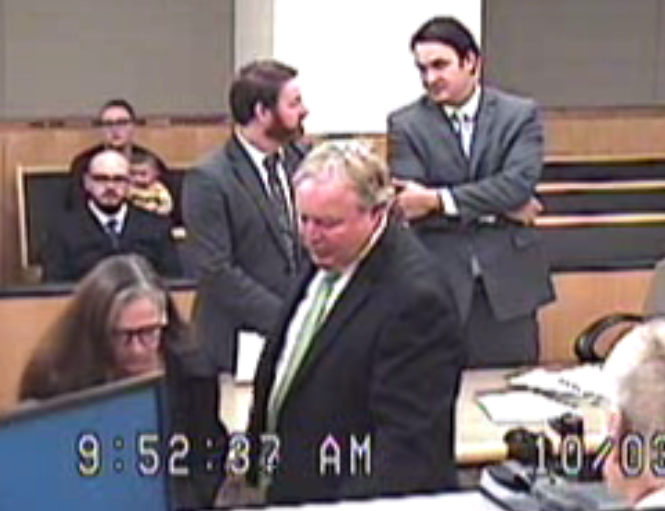 9:53:37 AM
JT: How was your honeymoon?
KC: (mumbles response)
JT: I have a potential (inaudible) phone call (inaudible). Are you up for it?
KC: (inaudible)
JT: (inaudible) just call this girl in Oregon and ask her if (inaudible)
9:53:49
JT:  (inaudible) she had a baby (inaudible) and two years later she said it was his kid. She got a paternity test.  My guy didn’t take the paternity test, my advise and several criminal attorneys’ advise.  (Inaudible) ordered by the prosecutor. The age of consent is 18 in Oregon. Anyways, we just want his mom to have visits.
9:53:53
JT: You call up and ask if mom can have visits. She says no, ok. If she says yes, good.
KC: Why me?
JT: I can’t do it, I represent the dad. I’ll tell you a little bit more. Grandma, (pause) got a DNA swab (Terry laughs). We’re gonna test it, like secretly. If it’s his kid, he’s just gonna own up to it. If it’s not his kid, nobody (inaudible) test exists.
9:54:16
KC: Yeah, I mean I’ll, I’ll do it for free.
JT:  No, I’m gonna pay you some (inaudible). I’m gonna pay you for a half hour at least.
9:54:27
KC: (Inaudible) I mean, that’s the least I could do for you…
JT: Just say “I represent Grandma…(inaudible)”
KC: Give me the names and the numbers and I’ll (inaudible)

The partially captured audio is indicative of how Clark County attorneys fix the cases...even against their own clients. This is what they did to former Navy SEAL, Matt L'Hommedieu.

John Terry was assigned to represent Matt L'Hommedieu by Judge Darvin Zimmerman. They worked collectively to frame him for a murder for hire plot.

Posted by Matt L'Hommedieu at 2:58 AM No comments: